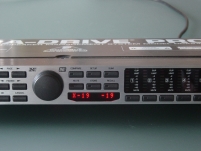 This is an extensive project, complete replacing the DCX2496 I/O board which sits at the back of the case and hold all input and output connectors. It has two goals: one, to replace the analog circuitry for higher performance, and bring the levels down from pro to consumer (-10dB); two, project to graft level control for each channel and global balance control and a few other features to a Behringer Ultradrive Pro DCX2496 Loudspeaker Management System (who dreams up these names, anyway?) digital crossover. (Note: full spec sheet and user guides at the end of this article).

My first mod to the DCX was a fully passive output board replacing the stock active board. That stock board used not-so-hot opamps. This project was published by AudioXpress and you can find it here.

The stock DCX has limited level control facilities: each channel (and there are 6 of those in a 3-way stereo set-up) can be adjusted +/- 15dB. But as with all digital level controls, the more you change the level, the more resolution you loose. At +/- 15dB you loose one or two bits of those 16 bits of the CD format.

I decided I needed a good old analog level control for my DCX. While I was at it, I thought it would be nice if I could also adjust the relative levels of the low, mid and high frequency bands to compensate for differences in speaker- and power amp sensitivities. Also, I would like to be able to adjust the balance for those 6 channels simultaneously, keeping the relative levels of the frequency bands intact.

I quickly realized that the only viable solution to do this with any accuracy and user-friendliness would be an electronic volume control solution. With 6 channels, all possibly having different settings, and all having to change in synchronization, that means a micro-controller. That also opens up the use of an IR remote control!

The unit will have balanced XLR outputs but can be used to feed unbalanced inputs without change. (You may need to use an XLR-to-RCA adapter).

Lastly, I foresee to use this unit with different speakers or different speaker-amp combinations. It would be nice to be able to save a complete setup, relative levels, balance etc and being able to recall it later.

So, there you have it: the spec sheet for my 6-channel remote controlled level control.

The User Interface consists of two 4-character displays that live on the DCX front panel as shown in the picture.

The picture shows the display pcb with microcontroller and IR remote receiver (Yes dear, it will be mounted upside down...). The bezel for the memory card slot on the DCX front panel is removed. A red Plexiglass window is glued in and the display is mounted behind that window.

The heart of the system is an multi-channel level control chip, the CS3318. This is a truly remarkable chip. Designed for automating studio consoles, it has 8 analog channels, each of which can be controlled in 0.25dB steps from +22dB to -96dB, with -112dB THD.

As you see below, the CS3318 actually has 8 channels (all things digital come in powers of two). For the DCX2496 6 channels are needed to control the output to the stereo 3-way system. The two remaining channels are used to set the level for the A and B analog inputs. That means that if you use analog rather than digital inputs, you can leave the DCX input level control at 0dB and set the input level with my unit to just below clipping.

Technology glimpse: Jeff Rowland Design Group have been using the predecessor of the CS3318 (the CS3310) in some of their products. They offer some background on the technology that allows these chips to reach the -120dB THD level. Interesting (technical) read.

The CS3318 is a single ended unit. The DCX2496 however puts out 6 balanced signals from three balanced stereo DACs. I convert each balanced signal to single ended before going into the CS3318. That cancels some of the remaining differential distortion and also gets rid of the +2.5VDC the outputs of the DACs are riding on. The output XLR is connected in such a way that the unit can be used either as a balanced output or an unbalanced output.

The whole system is controlled from a standard IR remote control. You can use the control to set all channel levels, balance, save/restore sets of settings (what I call 'profiles'), as well as MUTE and On/Off. In addition, you can use it to set the levels of the analog inputs A and B if you are using those. I have tried to organize the control functions and buttons software as logical as possible.

Want to build one yourself? A complete kit is available from Pilgham Audio; complete turn-key mods of your DCX are also available.

The replacement I/O board does not contain a replacement for the mic input connector C. This is supposed to be used for measuring the delay between the L and R speakers in a stereo system, and digitally add a delay to one channel to make them appear at equal distance from the listener. By request from several users, I have designed a small PCB that contains a dual XLR/TRS connector and a mic preamp, and which is mounted in place of the existing digital input connector. This restores the mic input with the original functions. Contact Pilgham Audio for details and the PCB or kit.