Don't be such a scientist 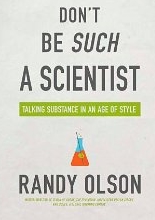 Talking Substance in an Age of Style

Note: This article is adapted from a blog I did at www.diyaudio.com, where it elicited lots of comments and discussions.

I didn't get it. There are gifted design engineers on this forum. They get involved in threads. and then, very often, eventually an 'issue' develops and the engineering guy gets into trouble and binned or worse. Why why why? Happened to me a few times. Not that I got binned, thank Ohm, but I got close to leaving because I too got enough of it.

Of what? Let me explain.

Most engineering types like to explain things, to tell others with less experience and knowledge what they are doing wrong and how they can do it better. They inundate you with facts, figures, links to engineering papers etc, and expect that the other guy flows over with gratitude. But, funny enough, it doesn't happen that way. The 'other guy' gets pissed off from being corrected all the time. Hell, he didn't come here for that, he came to have fun, discuss his hobby and his latest creation.

[flashback] At the time Al Gore's An inconvenient Truth came out, the same director (!) also made Too hot not to handle. Both on the issue of Global Warming. Do you remember that other movie? Neither did I. Did you know that Al's flick, which is basically a spiced-up PowerPoint presentation, boxed $50million? What made these movies so different? THNTH was 100% accurate, had all the right figures and simulations. It was also boring. AIT has been shown to have some errors in a few places (although accurate in a general sense). Some of the graphs were 'enhanced' to let the trend stand out better. But it was NOT boring, because it appealed not just to the brain, but to the heart, to the gut, and Al's sex appeal also helped (it's the eye of the beholder, of course).

[regular programming] Randy Olson is a guy who left a tenured position (the pot of gold for any academic person) to go to Hollywood. A scientist turned communicator. His short movie A flock of Dodo's earned him praise because it was a scientific movie that got to the heart, the gut etc. It may seem prepostrous to compare this forum with a succesful movie maker, but we can all learn a lot here, especially we the engineering types. If you, as an engineer, want to explain why this newby has his cascodes wrong, you are in the same business as Hollywood. You are telling a story that you hope will stick and have an effect. So far, Hollywood is much, much better at it. Facts are important. Engineering is important; none of our audio marvels would exist without solid engineering. Errors should be avoided. BUT, if the story you tell is boring, you're wasting your time. And as soon as you find out you're wasting your time, you get frustrated, angry, you clash with the members and the mods and you've lost.

Tell the engineering story from the heart, from the guts. Tell your own crooked path to learning, making mistakes, the joy of doing it right. By all means, be sure to get the facts straight. But don't be boring, don't be such a scientist!

Randy Olson, "Don't be such a scientist - Talking substance in an age of Style". Buy it.