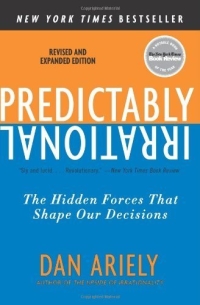 The Hidden Forces that Shape our Decisions

This is a delightful book offering insight into why we do the things we do, and why we think the things we think. As the title gives away, the book makes the case that what we do and think is not at all rational, notwithstanding the fact that we KNOW we act and think rational. Don't we?

No, we don't. The book is in large part a report on many experiments, some very smartly designed, to investigate our preferences, motivations and reasons behind our thoughts and actions. Just a few chapter headings will make this clear: 'Why we often pay too much when we pay nothing', Why the mind gets what it expects', Why we are dishonest, and what we can do about it', Why options distract us from our main objective', Why a 50-cent Aspirin can do what a penny-Aspirin can't".

You get the point. I want to describe just one or two experiments, which should give you an idea of what the book talks about. This experiment was conducted with the participation of MIT students, and involved two versions of the same beer. One was the unadultered version, called beer A, the other was laced with Balsamic Acid at two drops per ounce of beer, let's call that beer B. All samples and freebees were unmarked and the nature of the difference was not disclosed. Students were offered small samples of each and then asked from which one they wanted a free pitcher. A majority of the students asked for type B, the laced beer as they thought it tasted better.

However, if students were told at the tasting that beer A was straight and beer B was laced with Balsamic Acid, they ALL chose beer A! In fact, when they knew which one was laced, many of them wrinkled their nose or otherwise indicated their disgust when sampling type B! (Beer brewers should take heed as to what they put on their product's labels!).

The other example I will just mention: a test about math proficiency differences between men and women. The outcome: if the tester, in introducing the test, stressed that in his view men and women were equally math-savvy and that this test was designed to prove that, women did largely as well as men. When the tester mentioned that it was common knowledge that women are less good in math, but that he was interested in just how large or small the difference was, women did markedly worse than men...

At the end, there's a section 'Thoughts about the Subprime Mortgage Crisis and Its Consequences'. This section, which may in some sense be the most interesting of the book, the author applies all what has been discussed in the book's main body towards the Subprime Crisis. And all of a sudden it all makes sense! You have a much better understanding how the crisis came about and you glimpse some possible avenues of action to try to prevent recurrings of similar crises.

One question will undoubtedly come up after reading this book: now that I know all the traps and unconscious biases, surely I can avoid them? Again, no, you can't, really. It becomes clear that even when you are, in an intellectual way, aware of the fallacies and false convictions, you still are a human being; you still are wired just like the next one who knows nothing of these things. And you still largely act irrational, just like the next, ignorant one. A sobering thought.

So what is then the value of such a book, of understanding why you act and think the irrational way you do? That value lays in the insight gained, which we as a society can use to re-arrange our institutions and organizations. To rearrange them in such a way that the circumstances and conditions under which we take decisions and choose between options can avoid to some extent those that would lead to irrational decisions and actions. We cannot change the human condition, but we can, in an à priory and off-line sort of way change the environment to promote more rational decision making. That is the reason the last section on the Subprime Crisis is included; in hindsight, it is clear that it only could lead to the collapse of the system. With that same hindsight, augmented by the findings in this book, we have a fighting chance to do better next time.

A great read. Get it; it will tell you more about yourself.