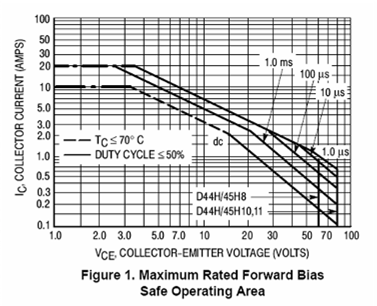 What 's all this SOA stuff anyway?

The safe operating area of a transistor describes all maximum values of combinations of Ic (or Id) and Vce (or Vds) that will not destroy the transistor or FET. But there is also a 3rd dimension, time. Some combinations of Vce and Ic are allowed only for very small periods, like only 10's of milliseconds or only a few milliseconds.

Especially bipolar power transistors are very sensitive to a destructive overload phenomenon called Secondary Breakdown. Since the die (the active chip) on the transistor is never perfectly homogenous, some small spots conduct more current than other spots. Those spots get hotter than others, which means they conduct even better, etc. The result is a very hot small spot that 'hogs' the current which can destroy the transistor. The effect is stronger with higher Vce so especially at high Vce the allowed Ic gets quite small. This is reflected in the SOA curve.

You can see that at say, 60V Vce, the allowed Ic is only 150mA or so, which represents only 9 Watts of dissipation. And this a a transistor with a nominal Pc of 50 Watts! On the other hand, you CAN dissipate 50 Watts in this transistor at Vce = 60V, as long as you limit it to 1uS.

Not all loads are created equal. The situation is getting worse when we use a real loudspeaker load with crossover filter for an amp. Such a load causes a phase shift between the amp output voltage and the amp output current (the load current) The phase shift may cause the output voltage, for example, to become negative, while the current is still positive, coming from the top half of the amp. That means that the top transistor has even more Vce while still having to source current, and Secondary Breakdown becomes a real danger.

There are several remedies:

Most amplifiers incorporate some form of SOA-limiting. To help with the calculations for such a protection circuit, I have developed a spreadsheet.

My basic basic protection circuit is shown here. It is not particularly sexy, and many such circuits, or variations of it, are used in power amps. A nice article by Michael Kiwanuka describing the tradeoffs appeared in Electronics World in 2002. My design is published by Elektor in May 2008.

Stop Press 1: I have changed the protection curve slightly to have a bit more power in complex loads. Referring to Part 3 in the May Elektor issue, the following component values are now recommended:

The working of the circuit is as follows: the diagram shows the top half of the power amp output stage with the protection circuit (the bottom half is similar with flipped polarities of course). Qout are the output transistors, Q1 is the protection transistor. Ic causes a voltage to develop across the power transistor emitter resistors Re. If that voltage becomes high enough (high enough current), Q1 will start to conduct and activate the protection.

Through R6, R5, R14 etc, there is an additional input from Vce, so the actual protection point becomes a function of both Ic and Vce, as was explained before. That Vce-link has two kinks introduced by zener diodes D2 and D3: above a certain Vce they start to conduct, and further rising of Vce above the kinks flatten the Vce influence on the protection point. The complete (involved) detailed calculation is given in the Elektor article. However, there is an MS XL spreadsheet that makes it much easier to 'play' with values. But note that although I did quite some testing, I'm not guaranteeing that is is faultless! Anyway, feedback appreciated!

Stop Press 2: Since the paX protection system was published in the May 2008, Elektor issue, some persons reported that the protection system may fire prematurely. René van Heijningen has done some tests for me and the cause was leakage on the detector side of the opto-coupler U1, an MCT6.

The following change has been tested (thank you René!) and takes care of the issue: Change resistor R1 from 10k to 18k; add a resistor R1a of 3.3k from ground to pin 5 or 8 (this is point ProtN in fig 2) of the optocoupler. You can put this resistor on the bottom of the circuit board.